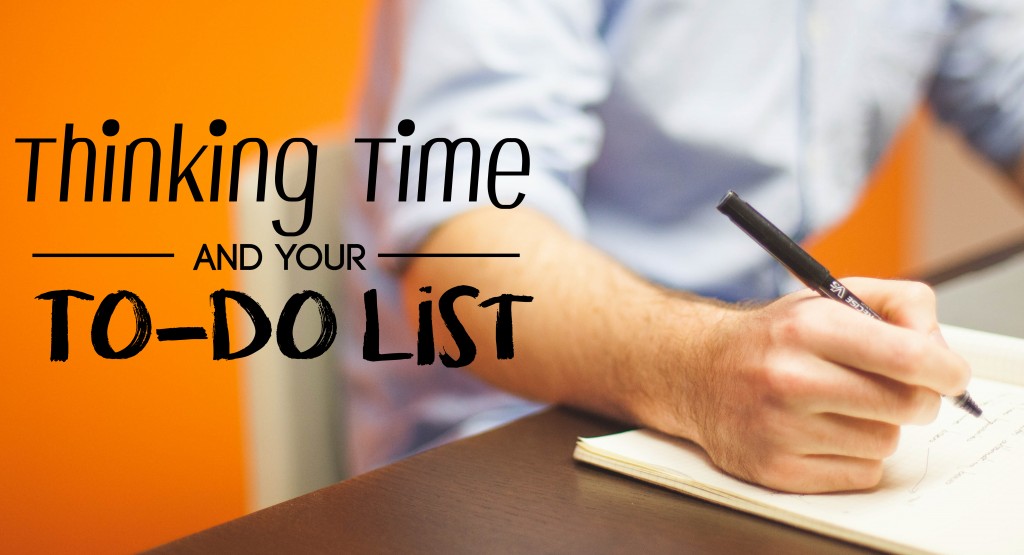 “How’d it go last week during your thinking time?” I asked one of my clients. He laughed and said, “It was a little rough. I thought of about a million things that I needed to do, but towards the end of the week I noticed that my mind stopped racing so much. I still thought of things to do, but not in the same way as the first few days.” I was curious. I wanted to know if his mind just got quieter as the days wore on or if he had a strategy. It turns out that he did have a strategy. He kept a notebook beside him and when he thought of something to do, he wrote it down.

Interesting! This has long been a habit of mine and I wondered if I had, at some time or another, shared it with him. Neither he nor I recalled that, but I was pleased to find that it was a strategy that worked for him.

Of course, I couldn’t just leave it there. I wanted to know if he did anything with the notes later. “Not really,” he said. “I just wrote them down.” My mind was full of questions. I asked him if he saw anything different in the amount of time he spent on his to-do list. As it turns out, his list got smaller. He went on to tell me that even though his list got smaller, he accomplished more. He found that even though he never looked at the notes again and he never put them on his to-do list, he was getting the things done anyway. Being the little researcher that I am, I had to find out what other people had to say about this. The question in my mind was, “Does the act of writing something down make it more likely that you will do it, even if you never look at your writing again?”

There are a lot of articles out there about writing things down. Most of them are about journaling, goal setting, or much more structured list writing with the purpose being to go back and mark things off your list as you accomplish them. There was a consensus that writing things down helps us process, focus, and dream bigger. Additionally, we get satisfaction out of the accomplishment of marking the things we get done off our lists. This wasn’t surprising to me, but it didn’t really answer my question.

It seems that the more my client got done, the more energy he had to do other things on his actual to-do list. I’m not sure whether this was true because he wrote them down, or because he wrote them down during his “thinking” time, or because simply allowing himself to clear his head on a regular basis created more energy. But he reported not only getting more done, but having energy to spare. A theory of mine is that when we keep things locked up inside of ourselves, our brains are constantly reminding us to complete our tasks; make long overdue phone calls; schedule dreaded, but important appointments; finish our projects; and much more. The energy used for these constant reminders is tremendous! When we allow ourselves to just relax and satisfy the “reminder” part of ourselves by writing these things down during this time, we are saying to that part of us, “It’s okay. I’ve got it covered. It’s written down. You can stop reminding me now.” Now satisfied, the little reminder can quiet down and allow you to do the same.

I wonder if he completed the things he wrote down with no further prompting because our minds remember more readily when they are in a relaxed state. Is it possible that this practice helps with memory? I wouldn’t be surprised if we find that it does. Sometimes, when I have too much to do and I’m running from one thing to another, I don’t remember entire conversations or having driven to my destination. It’s almost as if I am sleepwalking through life. However, when I take time to stop running and start relaxing into the natural flow of thought I find that everything becomes clearer.

Is this true for you? If you have incorporated thinking time into your life I’d like to hear about what you have discovered. If you haven’t incorporated it, why not give it a try this week? In any case, I invite you to let me know what you think. Change your thoughts (and perhaps write them down) and you’ll change your life!

This article was posted in Life Coaching, Time management. Bookmark the permalink. Follow comments with the RSS feed for this post. Comments are closed, but you can leave a trackback: Trackback URL.